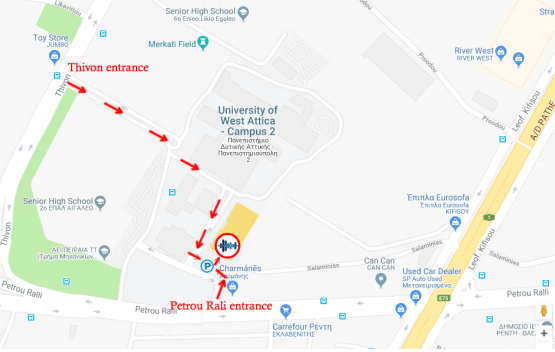 There are not many hotels near UNIWA. As a general recommendation:

You can book any hotel at the center (Sindagma, Monastiraki, Acropoli) which are all very near to the historical center where there a lot of options regarding restaurants, bars and cafes. You will find a lot of hotels there and since the competition is high, you may get a good value for your money, while the historical center is within walking distance (less than 5 minutes).

Evangelismos station is a bit further away (20-30 minutes walk to the historical center, but only a few minutes away from the previous metro stations). From Evangelismos metro station there is a direct metro line (line 3), which takes you in about 30 mins to Egaleo metro station and can take you also directly to the airport (about 40 mins trip, with the trains to the airport leaving every 30 mins, while you should calculate about 10 mins walking to the terminals). Near Evangelismos, there are 4 and 5 star hotels. For example, Best Western Ilissia (next to the Hilton) is a good choice. If you can afford (or your organization has a special arrangement), hotels like the Hilton, Crown Plaza and Divani Caravel are located within a distance of 500 meters from Evangelismos station.

1 Though Sintagma is a hub (buses to the airport also leave from here), and is on the direct (line 3 to Egaleo), you should be careful, as some times the station is closed.